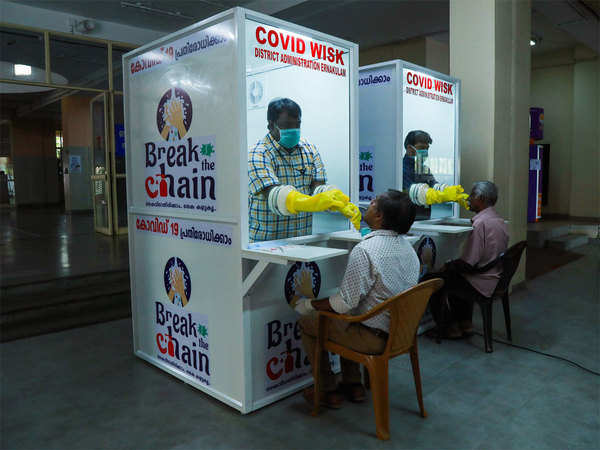 The ‘phone booths’ that are making Covid tests in India easier, quicker and safer…

In the final week of the 21-day lockdown, India has begun using the ‘phone booth’ testing method to tackle the spread of the novel coronavirus, reports said.

The testing method involves collection of samples from inside a box of aluminium and glass. The suspected coronavirus-infected individual, whose samples are being taken, has to walk up to the booth and stand in front of the glass exterior. Thereafter, s/he is directed to follow the instruction given through a public address system for collection of swab sample.

The healthcare worker inside the kiosk collects the sample and then, follows the sanitisation process before proceeding to take the next sample. The collection process, fully contactless, gets over in five minutes.

The phone booth test is likely to significantly reduce manpower requirement and the need for PPE kits that are anyway in short supply — a major boost to the safety of healthcare workers.

The main advantages of this procedure are that it needs fewer healthcare workers and strictly adheres to the norms of social distancing.

Consisting of a small cubicle, the structure looks very much like a phone booth. It has PPE items such as gloves for the healthcare worker and a kit for collecting samples.

The booth is low-cost. Each model costs about Rs 15,000-20,000. It is also portable — it can be mounted on a vehicle and transported to any location. It can be particularly useful for collecting samples in hotspots and border checkpoints, a PTI report said quoting an official.

A booth was installed at a government hospital in UP’s Ghaziabad a couple of days ago — so far the only one of its kind in Delhi-NCR region. Kerala and Jharkhand are among the states that have already adopted this method. There are plans to do the same in Mumbai. According to reports, many such ‘phone booths’ are likely to begin operations in other parts of the country as well.