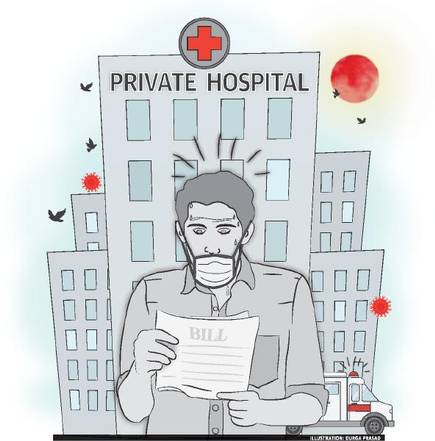 the bed charges in private hospitals, including corporate hospitals cannot exceed Rs 4,000 per day in normal wards, Rs 7,500 in Intensive Care Units (ICU) without ventilator and Rs 9,000 with ventilator support.

The Telangana government on Monday capped the cost of Covid-19 tests and treatment at private labs and hospitals across the state and said there were no plans to reimpose lockdown restrictions in the state.

State health minister Eatala Rajender told reporters that the private labs authorised by the Indian Council of Medical Research (ICMR) in the state would not charge more than Rs 2,200 per person for a single Covid-19 diagnostic test.

However, the private hospitals would be permitted to collect additional charges for the anti-viral drugs when the patients are on ventilator. Some anti-viral injections would cost up to Rs 50,000, he said.

The tests would be done as per the ICMR guidelines, said the minister, adding any suspected patient can undergo a test. However, all positive cases don’t have to get admitted to the hospitals. The asymptomatic patients who test positive would have to be under home quarantine only, unless they develop severe symptoms.

KCR on Sunday night announced that in the next one week to ten days, the health department will conduct tests on 50,000 people in 30 Assembly constituencies in and around the capital city.

The minister said the health department was establishing a link between private health care establishments and the government authorities for sharing of information related to number of tests, positive and negative cases and number of persons who are admitted at private hospitals.

“The private hospitals would have to upload the information about the tests and treatment on the health department portal,” he said.

Rajender advised the private labs not to unnecessarily conduct tests for Covid-19 on people who don’t have symptoms. “As far as possible, people could get tested in government labs if they have any symptoms. If they really want to go to private labs, it is their wish,” he said.

The government would not take up rapid testing, said the minister, but would continue with reverse transcription polymerase chain reaction (RT-PCR) test. Mass testing would be done in several parts of Hyderabad and other containment zones in the state which reported a high number of cases.

The department will do surveillance on each household in Hyderabad to prevent the spread of the deadly disease, he said.