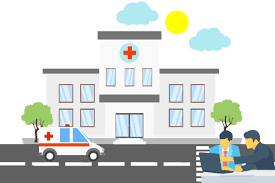 Regulatory hurdles in setting up a new hospital in India……

In a country which has an increasing tax regime yet completely lacks in providing adequate and quality healthcare or medical security to its citizens, private hospitals are the only alternative left for a huge chunk of the population both rural and urban.
At present, healthcare in India suffers from under regulation subjecting the populace to poor quality of treatment, quackery menace and high costs. Thus the onus once again falls upon the government to ensure that the mushrooming private clinics and hospitals are reliable and provide quality healthcare to their patients. On the other hand, the process should not be made so difficult that doctors who are setting up private clinics get derailed from their primary objective of treating patients and instead remain caught up in various issues of the establishment.

It was only on August 17, 2010, that the Clinical Establishments Act (CEA) nicknamed as “a tool to improve healthcare,” was passed by the Parliament, to provide for registration and regulation of all clinical establishments in the country with a view to prescribing the minimum standards of facilities and services which may be provided by them so that the mandate of Article 47 of the Indian Constitution for the improvement in public health may be achieved. It came into force in 2012. What seemed to be a very positive step on paper has however drawn mixed responses, including some stern criticisms. India Medical Times reached out to several doctors who have successfully set up private clinics to bring forth their experiences, regulatory issues faced while trying to set up their own clinics and their views on the current state of affairs, particularly post the CEA.

Dr Pankaj Garg, who runs the Gastroenterology Garg Clinics at Panchkula in Haryana, while speaking to India Medical Times pointed out how despite the CEA, the process of setting up a private clinic remains extremely tasking and vague. For once, there is “no single window for the various licenses that are required” to start a hospital and there are “way too many regulatory bodies”. He suggests that there should be only one file per hospital in any area which would make the management and monitoring easier for both the government and the doctors involved. Moreover, according to him, the “Indian system as a whole is not geared” to make such radical changes or facilitate and enable the doctors in developing their work further.

Likewise Dr Chytra Anand, CEO (Dermatology), Kosmoderma Clinics, Bangalore, points out that as per the Karnataka Private Medical Establishments Act, doctors are required to obtain trade licenses in order to establish a private hospital or clinic unlike in Maharashtra for e.g. Thus despite the CEA, rules may vary across states. Apart from the trade licenses, she mentions the various other clearances, licenses and permissions such as regarding electricity, bio-waste management etc are required which entails a tedious process coupled with corruption often resulting in harassment of the doctors. A partial solution to this, she feels, is to make the application process online. However, she feels that will not curb the issue of corruption. To quote her – “You have to bribe everyone at all levels, from the peon and above.” According to her, the ratio of registered to unregistered clinics is 1:10. Moreover, she believes there is a need for separate rules for Tier 1, 2 and 3 cities, which are not even updated. Most importantly, she says that the rules should be the same for all schools of medicines, otherwise, she says, it is “unfair.”

Dr Dinesh Bhujangrao Thakare, Director (Pathology), Thakare Pathology Laboratory, Phoenix Labs, Amravati (Maharashtra), terms the CEA as “theoretically good but impractical and contradictory in itself”. He too feels that it breeds corruption. As an e.g., he says that firstly under this Act, the authorities can come and visit a clinic at any time without notice and in case of any failings from the rules prescribed, according to him, the doctors are subjected to fines which begin from Rs 50,000 for the first time offenders and subsequently increased to Rs 1 lakh, Rs 2 lakh or Rs 5 lakh. To quote him, “this is the perfect setup for corruption.”

Another setback, points out Dr Thakare, is the fact that “doctors require permission from their neighbours” in order to set up private clinics as any complaint based on ‘disturbance of peace’ or ‘noise pollution’ may lead to shut down of the hospital. In short, “hospitals cannot be located in residential areas and thus need to be set up in commercial areas which means that costs will steeply increase. Moreover, since the doctor cannot then live there, other doctors will have to be employed which would entail even more costs.

Thirdly, according to Dr Thakare, as per the stabilisation clause, patients cannot be shifted unless they are stable. In case the condition of a patient worsens during transportation, criminal cases can be filed against the doctor. So, instead of taking that risk, doctors would tend to hold the patient back, despite the need to be shifted to a place where there are more facilities and better treatment available.

Dr Thakare too agrees with the view of the other doctors that although there is a need for regulation, the current Act needs significant amendments. As the states are different geographically, there cannot be a central ruling for all. Moreover, according to him, the rural areas cannot meet the standards of CEA. Also, he is of the view that all medical associations should be actively involved while framing any Act related to healthcare or medical profession.

Apart from the above, a few other points which surfaced are:

➢ Need to Display Fees and Prices: Most of the doctors have also mentioned that the fees depend on specialisation, skills and seniority among other factors, thus it is not always possible to display the fees.

➢ The CEA has Fixed Protocol: Since medical science is not a fixed non-evolving field, for e.g. different patients may respond differently to a particular treatment, there cannot be a fixed protocol for treatment. Most doctors feel that there should be established guidelines instead of protocols, differing from which may lead to criminal cases against the doctors.

➢ The Compensation Law: It is also deemed to be lop-sided against doctors. Dr Thakare cited Dr Kunal Saha’s case in this context.

➢ Violence Against Doctors: Most doctors feel that although there are increasing cases of violence against doctors, there is a lack of any Central Act for protection of doctors against violence.

Thus the doctors who try to set up a new hospital have to go through tiresome bureaucratic measures which on the one hand are required to ensure quality and safety to patients, on the other hand the same processes stand in the way of the doctors trying to provide their best services as they are caught up in the complex web of vague, multi-layered administrative rules and regulations. The CEA probably needs to be amended to make the process of licensing more efficient while curbing the scope for corruption at the same time.