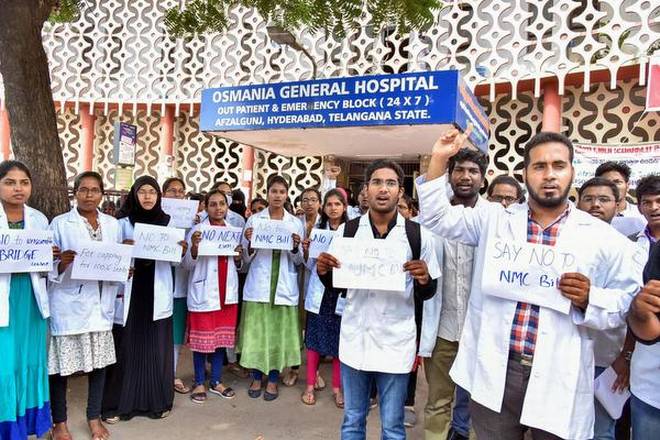 The Narendra Modi government hopes the National Medical Commission (NMC) Bill will bridge this gap and give a fillip to the healthcare system in the country.

India is not producing enough doctors. The country faces a shortage of 5 lakh doctors. The World Health Organisation (WHO) prescribes a doctor-to-patient ratio of 1:1,000.

India has a doctor-patient ratio of 1:1,596. This means for every 1,000 people seeking medical treatment there is less than one doctor (0.62). The situation is worse in rural areas.

The Narendra Modi government hopes the National Medical Commission (NMC) Bill will bridge this gap and give a fillip to the healthcare system in the country. But the bill is being opposed by practising doctors.

The call to revamp health administration started arising when the MCI was hit by a huge corruption scandal leading to arrest of its chief Ketan Desai in 2010 and dissolution of the medical body.

It was recreated in 2013 and dissolved again in 2018. Currently, a board of governors regulates the entire health infrastructure of the medical bodies under the MCI.

This will change with the formation of the 25-member NMC. The MCI set standards of medical education, regulated admission to medical colleges and oversaw registration of doctors.

The NMC will regulate fees for half of the sets in medical colleges at both MBBS and postgraduate level in all private and deemed universities. It will also review seat distribution arrangements in various medical colleges to bring uniformity as far as possible.

The government argues that this provision will make medical education affordable even to poor people. The Indian Medical Association, the largest body of doctors in India, does not agree. It said the NMC bill is pro-private management and will lead to corruption hampering the chances of aspirants from poor financial background.

The NMC bill proposes to set a single graduation examination for MBBS degree, eligibility to get admission in the postgraduate course and licence to practice.

This will be called NEXT or the National Exit Test. This will also be the screening test for foreign students aspiring to get medical education in India. India does not have provision for a uniform screening test for a foreigner to get admission in one of the medical colleges in India.

Combining with NEET or the National Eligibility-cum-Entrance Test (NEET), NEXT will be the basis for all admissions in the medical colleges including in those of national importance such AIIMS, which was created by a separate law passed by Parliament.

This provision has been opposed by resident doctors of AIIMS who allege that the independence of the premier medical institute will be compromised.

However, the most contentious provision of the NMC bill is Section 32, which allows nearly 2.5 lakh community health providers (CHP) in the villages to prescribe drugs to patients. Protesting doctors and Opposition leaders say the government is practically authorising quacks to play with the life of unsuspecting patients in remote villages.

The government, however, says that the community health providers will play the role of game-changer if they are recognised following a proper registration process. Similar experiments in Assam and Chhattisgarh have lifted the quality of medical healthcare in the villages of these two states. A national rural health mission report said the medical services provided by such community health providers in villages are as good as MBBS doctors.

The NMC bill aims at creating a competitive environment among the medical colleges by introducing an annual ranking system. The Medical Assessment and Rating Board (MARB) will be set up to conduct assessment of the medical colleges and put in place a system for ranking medical institutes.

The MARB will be the topmost body to sanction opening of new medical colleges, adding a postgraduate course in an existing MBBS college and the number of seats in each of these institutes.

Recommendations for replacing MCI with a new body or two separate bodies for regulation of medical education and medical practice were made 10 years ago by the Yashpal Committee and the National Knowledge Commission.

The NMC bill does not reflect a structure as suggested by these panels but it incorporated some of the changes suggested by a standing committee of Parliament and Niti Aayog in 2016.