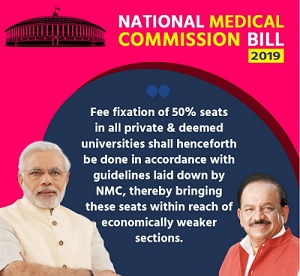 Modi government considers this bill as one of the biggest reforms

The Rajya Sabha today passed the National Medical Commission (NMC) Bill even as thousands of doctors staged protests all over India. The Lok Sabha had passed the Bill on July 29.

In essence, the bill provides for setting up a National Medical Commission (NMC) in place of the MCI to develop and regulate all aspects of medical education, profession and institutions in India.

Modi government considers this bill as one of the biggest reforms. The bill seeks to annul the Indian Medical Council Act 1956 in the wake of allegations of corruption against the 63- year-old Medical Council of India (MCI). It is also aimed at addressing the shortcomings in the process of regulating medical colleges in the country.
Doctors’ bodies, meanwhile, have panned the bill as being “anti-poor” and “anti-student”.

Here is all you need to know about the bill that has the country’s medical fraternity on the edge:
— India’s medical fraternity claims that the bill will encourage quackery. It stems from the fact that although the bill does not openly talk of a bridge course for Ayush doctors, it does stress on “enhancing the interface between systems of medicine” — such as Central Council of Homoeopathy and Central Council of Indian Medicine.

The bill also envisages defining Community Health Providers (CHPs) as persons granted a licence to practice medicine at mid-level. It’s not yet clear as to what kind of professionals could be certified as CHPs.
— These CHPs would be allowed to prescribe specified medicines independently in primary/preventive healthcare, but “only under the supervision of medical practitioners” at higher levels, says the bill.
— A key provision of the bill aims to bring in uniformity in medical education standards in India. It seeks a common final-year MBBS exam, to be called National Exit Test (NEXT), for admission to PG courses and also for obtaining a practice licence.

— It proposes that that the “final year MBBS exam be treated as an entrance test for PG and a screening test for students who graduate in medicine from foreign medical colleges.” NEET will continue to be the entrance examination; premier medical institutes such as AIIMS will also have to stick to it.

— Foreign educated medical students — who have been subjected to a screening test no Indian medical graduate had to clear — had long been demanding something on the lines of the NEXT.
— Currently, MBBS passouts from such countries as US, UK, Canada, Australia and New Zealand are automatically permitted to practise in India. Under the new law, such students will now have to clear the exit exam.
— The new exit examination is expected to be implemented within three years of the bill becoming a law.
— The bill seeks to do away with the practice of yearly inspections. It will ensure the end of inspector raj and will facilitate the addition of undergraduate and post-graduate medical seats, the government says.
— Under the new bill, states can only “advise” the NMC. But the council can choose not to accept those advices. However, no medical college will be set up without the state government’s permission, the centre has clarified.

— MCI didn’t have the power to regulate fees. The new commission, in contrast, is envisaged with the power to determine fees in 50% private medical college seats. According to critics, it would be akin to “allowing 100% of private college seats to be unregulated.” Most states currently have committees that fix the fees.

— So far, even if MCI suspends a doctor, the decision is not binding state medical councils who can refuse to comply with it. In contrast, the new NMC bill clearly states that the ethics board will “exercise appellate jurisdiction with respect to actions taken by state medical councils”.
— The basic objection from doctors pertains to section 45 of the bill, which, according to them, empowers the Centre to override any suggestion of the NMC.

— A host of amendments are being demanded. If not amended, the bill will lead to deterioration of medical education and degradation of healthcare, said doctors.

— The Indian Medical Association (IMA), the largest body of doctors and medical students in India with three lakh members, is opposing the the introduction of NEXT by scrapping the NEET-PG and regulation of fees by the NMC for 50% seats in private colleges and deemed varsities.
Source:- Economic Times