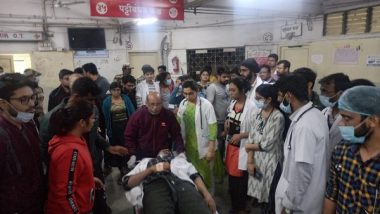 “We demand an establishment of police chowki in the area to stop such incidents in the future and a strong legal actionable against the offenders. In view of the protest, residents of SVNGMC Yavatmal will stop all emergency and non-emergency services with effect from tomorrow. We urge you to take immediate appropriate action regarding this incident,” it added.

A resident doctor, who was on rounds in the hospital was allegedly attacked with a knife by the patient.

Another doctor apparently suffered an injury when he came to the rescue of his colleague.

The doctors protested against this attack and raised slogans against the police in the district.

According to the police, the accused Suraj Thakur was mentally unstable and had stabbed himself two days ago.

The accused was arrested on Thursday night itself.

“Accused Suraj Thakur was admitted at Yavatmal Medical College Hospital. The accused had stabbed himself two days ago. He is a mentally unstable person. While the doctor was on rounds, the accused attacked him with a fruit cutter (Knife). The police arrested the accused last night,” said Superintendent of police (SP) Pawan Bansod, Yavatmal. (ANI)