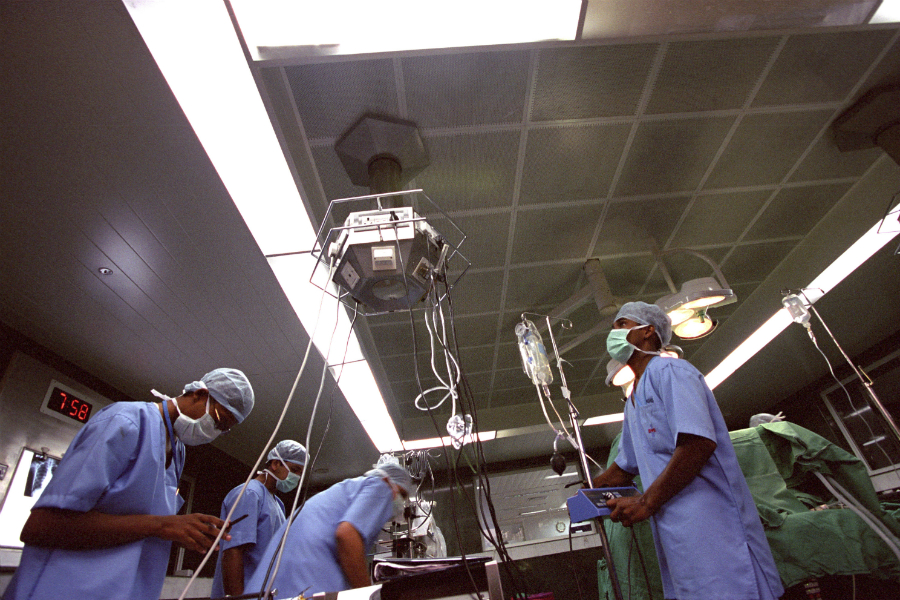 Nagged by a sharp back pain three years ago, Abidemi Ogbonna from Lagos, Nigeria, decided to visit a nearby hospital called Apollo. Thinking it was just a minor problem, she was shocked when her physician informed her that she urgently needed kidney transplant.

The procedure could not be performed locally, her doctor told her. Flying to India was her best chance of a successful operation. Ms. Emmanuel’s middle-class family could afford the expenses, and so immediate arrangements were made for her visa.

The Apollo Hospital in Nigeria scheduled a surgery date with its counterpart in India, helped secure Ms. Ogbonna’s visa, and booked her flight and accommodation in India. All she needed to do was pay the bill. Once she did, she took the next flight and made the long journey to save her life. She was accompanied by her mother.

Ms. Ogbonna’s story is typical of hundreds of Africans who travel outside of their home countries for medical attention.

India is increasingly becoming popular with Africans seeking medical treatment overseas, because of its more affordable, state-of-the-art equipment and its highly skilled doctors. Ms. Emmanuel’s other options were the US and the UK; however, health care there is extremely expensive and getting visas to those countries is a nightmare, unlike with India, where visas are issued within a week and treatment is comparatively cheap.

State of health care in Africa

This is jarring news to a continent that carries a large disease burden, including the world’s highest rates of communicable diseases such as malaria, tuberculosis and HIV/AIDS, among others. According to medical journal BMJ, “Africa experiences 24% of the global burden of disease, yet it has only 2% of the global supply of doctors and less than 1% of expenditures on global health.”

Health care systems in many African countries are inadequately funded. For example, Nigeria, which is one of Africa’s richest countries with a national income of $594,257 billion (before the recent currency depreciation), spends only 4.6% on health care.

About 40,000 Nigerians visited India in 2015, half of them for medical reasons, such as transplant surgery, joint replacement and dental surgery, among other procedures, according to the Indian high commissioner to Nigeria, Ajjampur Ghanshyam.

But why are Africans seeking medical care in India?

Since the 1990s India has been flaunted as a global leader in “medical tourism,” defined as the travel of people to a place other than where they normally reside for the purpose of obtaining medical treatment in that country.

India boasts highly qualified doctors and state-of-the-art equipment, and the treatments are approved by the World Health Organization (WHO) and the US Food and Drug Administration. In addition to quality medical services provided by its hospitals and doctors, patients go to India because medical costs are a lot cheaper compared with the US and UK.

“The cost of a kidney transplant surgery with blood-related donor is between $13,000 and $16,000,” says Dr. Dheeraj Bojwani, the director of Forerunners Healthcare Consultants, one of the leading medical value providers in India, which is associated with top hospitals and surgeons in the country.

Many patients from Africa prefer Apollo Hospital, which is headquartered in Chennai in India’s state of Tamil Nadu. With more than 60 locations throughout India, it has its own health insurance scheme and has established partnerships with 10 international insurance companies that assist patients to cover medical costs.

Besides, the Indian government is providing additional incentives to attract foreign patients. These incentives capitalize on the country’s “exotic” appeal, and include tourism packages allowing patients to bring along a companion for a discounted travel cost to sightsee landmarks such as the Taj Mahal.

For English-speaking Africans such as Ms. Ogbonna, language is not a barrier, as English is the lingua franca in India. And for those seeking forms of treatment other than surgery, India is home to alternative treatments such as Ayurveda, a plant-based therapy that uses herbs, breathing exercises, diet changes, meditation and stretching for healing.

Ms. Ogbonna has recently returned to her home in Lagos where she is recuperating and where she spoke to Africa Renewal by phone. Doctors in India advised her to visit Apollo Hospital in Nigeria for a follow-up. But she fears that because of a lack of equipment, her Lagos doctor may not be able to provide the full post-surgery care that she desires.

Follow-up visits to India may not be possible for kidney transplant patients who have relapsed and who may need to be hospitalized in a matter of minutes, considering the time needed to plan the journey (at least five days to get a visa) and the subsequent flight costs.

To address these issues, the Indian government established the Focus Africa Programme and partnered with the African Union to set up the Pan African e-Network to ensure continuity care for patients.

Established in 2002, the Focus Africa Programme facilitates India’s trading with several African countries, including Egypt, Nigeria, Kenya, and South Africa, in affordable pharmaceuticals (in addition to other trade items) so that they become easily accessible on the continent.

The Pan-African e-Network promotes tele-education and tele-medicine to ensure continuity of care for African patients treated in India. Tele-education allows one to receive lessons over an Internet connection or video, while tele-medicine specialises in diagnosing and providing health care from remote locations over a telecommunications device. Such a system allows a patient to access care through teaching hospitals in Africa that are connected to sister hospitals in India.

Indian health care firms are also taking steps to create joint ventures with hospitals in Africa. At the moment they are investing in Egypt, Ethiopia, Kenya, Mauritius and Mozambique.

Meanwhile, South Africa has been making medical advances, with statistics showing that in 2012, between 300,000 and 350,000 tourists from all around Africa travelled to South Africa for medical treatment. In addition to shorter travel times than India, South Africa advertises the added allure of safaris and spas.

African travellers coming to South Africa for medical treatments do so less for cost savings and more because of South Africa’s advanced infrastructure and medical technology, as well as its doctors, whose skills are on par with international standards.

For Europeans and travellers from the Americas and Asia, South Africa offers an affordable alternative for many cosmetic procedures, thanks to the weak rand. For example, a breast augmentation procedure that costs $8,000 in the UK would cost about $3,600 in South Africa, according to Medical Tourism SA, a consultancy firm that offers total health care information for medical travellers.

American patients who pay about $12,400 for in vitro fertilisation, a procedure that helps a woman become pregnant, can expect to pay a third of that in South Africa.

It is for this reason that the number of African medical tourists going to South Africa by air has increased by 54% in the past three years to 10,477 as of 2015, notes Seye Abimbola in a blog for the African Development Bank.

While medical tourism will continue as people shop around for prices and countries vie to improve their offerings, solving the health system challenges in Africa will likely reduce the amount spent on medical tourism. In turn, savings from medical tourism can be used to finance or subsidise health insurance for the poor.

Going forward, Africa should create regional and national medical hubs, as well as tap into pharmaceutical markets in order to produce and distribute generic drugs that will reduce dependence on overseas countries for medical treatment. Though offshore health care comes with many benefits, critics say it is not sustainable and it does not necessarily help African economies.

This article is for knowledge purpose only. The thoughts and analysis contained in this report are based on data and assumptions derived from external sources, and are presented for information purposes only. Though the authors have used reasonable efforts to compile and analyze the best sources reasonably available to them at the time of writing this report, the authors have not independently verified the completeness or accuracy of the data and assumptions, they do not make any representation regarding the same. Changes in the underlying data or operating assumptions will clearly impact the analysis and conclusions. Therefore, the information contained in this report should not be relied upon without independent investigation, analysis and the authors will not be responsible for any liabilities incurred by any third party as a result of reliance upon such information.